Technology at the service of speed: the year of MotoE

Drama, excitement, breathtaking manoeuvres and duels to the end. The Valencia race grand prix, which took place from 15-17 November, was the final stage of the FIM Enel MotoE World Cup that more than managed to live up to its promise. For the denouement, in actual fact, spectators had to wait until the very final corner in Race 2 of the season’s grand finale. Doing just enough to become the champion of the inaugural edition of the electric motorcycle world championship was the original favourite, Italy’s Matteo Ferrari. Riding for the Trentino Gresini team, Ferrari came third and fifth in the two races and was followed in the overall standings by British rider Bradley Smith and the Brazilian Eric Granado.

Enel X, at the service of sustainable mobility

Enel X made its own important contribution to the show with our cutting-edge technology that supplied the bikes with the power necessary to speed around the track. As Title Sponsor and Official Smart Charging Partner, we supplied the 50 kW JuicePump charging infrastructure – the very same that can be found on Italy’s streets and used to charge road vehicles, thanks to the JuicePass app – while our photovoltaic panels powered the e-Paddock with renewable energy. Our solutions made it possible to combine the two worlds of edge-of-your-seat motor racing with electric mobility, a message summarised neatly in #XforSpeed, technology at the service of speed: not only in Valencia, but throughout the duration of the electric motorbike world championship.

This final long weekend of MotoE racing began on the Thursday with the first session of practice trials. The competition, which is organised by Dorna Sports in collaboration with the Enel Group, IRTA, MotoGP Independent Teams and Energica, requires that all riders race the same machine, the Ego Corsa developed by Energica.

The bikes supplied by the Italian company, which is a leader in the sector, carry a 20 kW battery, with a capacity of up to 120 kW and can reach speeds of 270 km/h, accelerating from 0-100 in 3 seconds.

The electric motorbikes can complete a full charge of energy in approximately one hour, thanks to the JuicePump recharging stations. Completing the service is the e-trolley, equipped with 5kWh power banks. These were also used for powering the tyre warmers in the pit lanes. 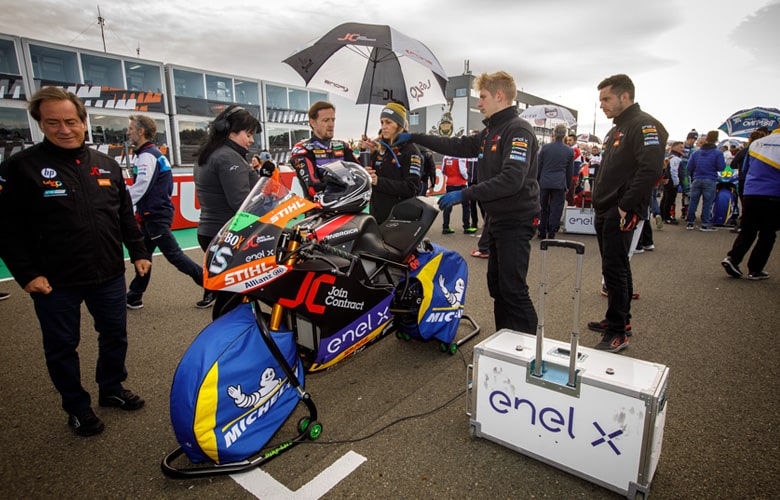 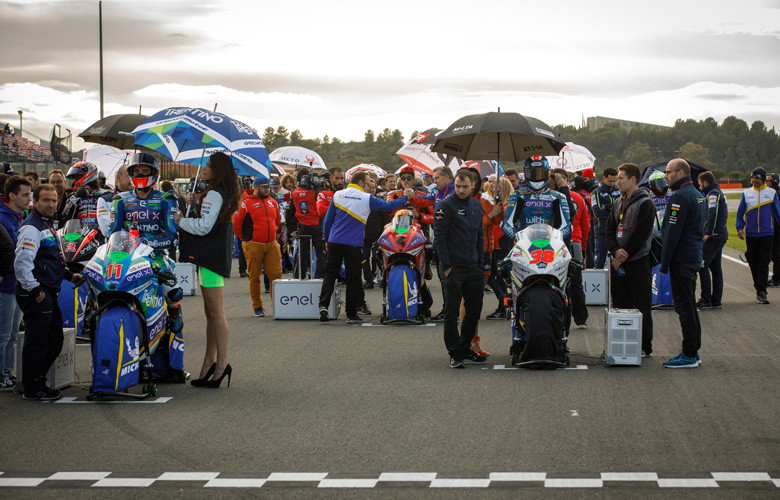 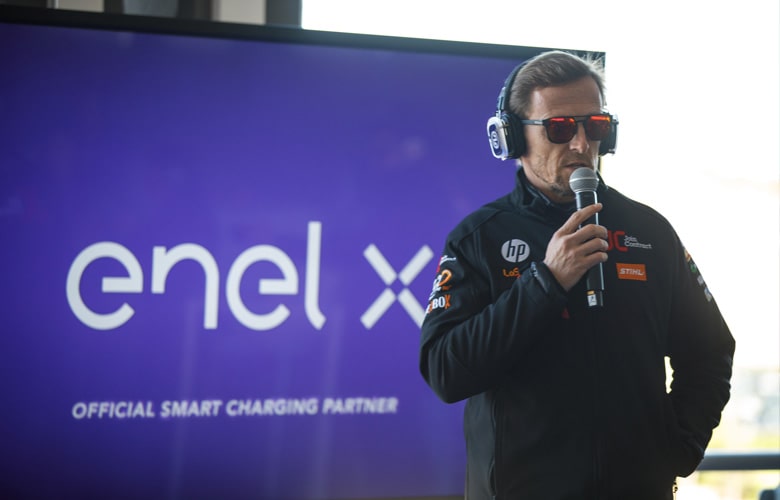 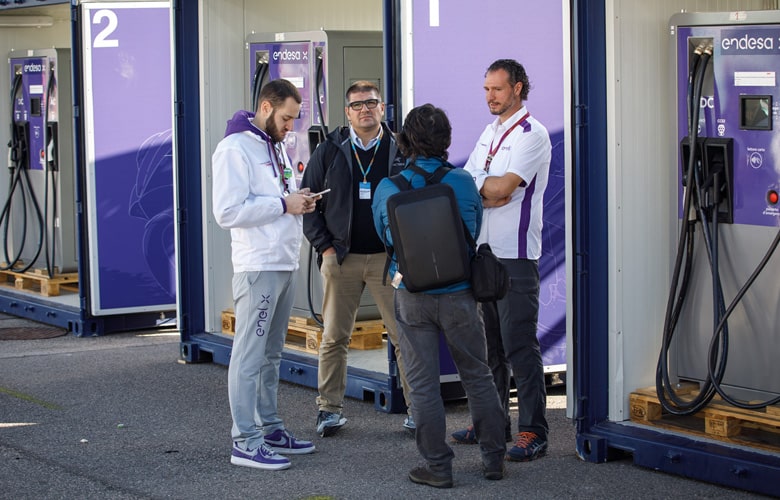 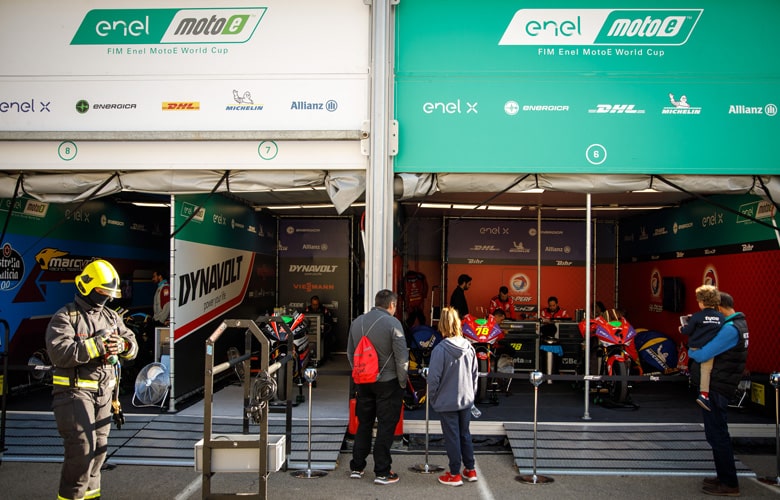 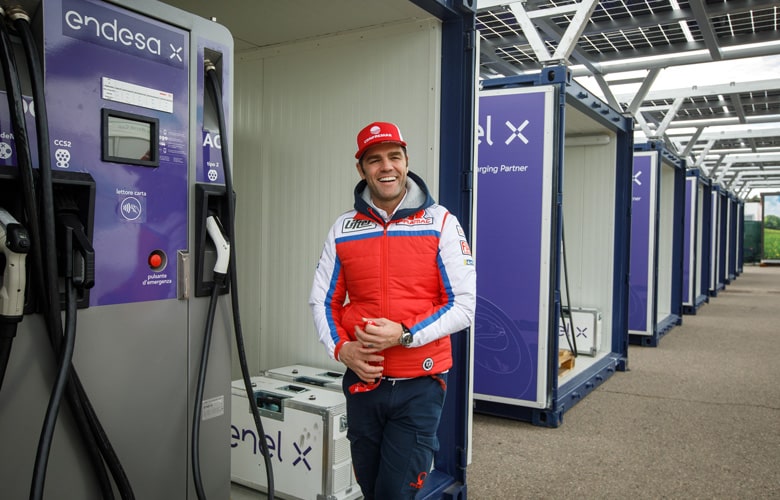 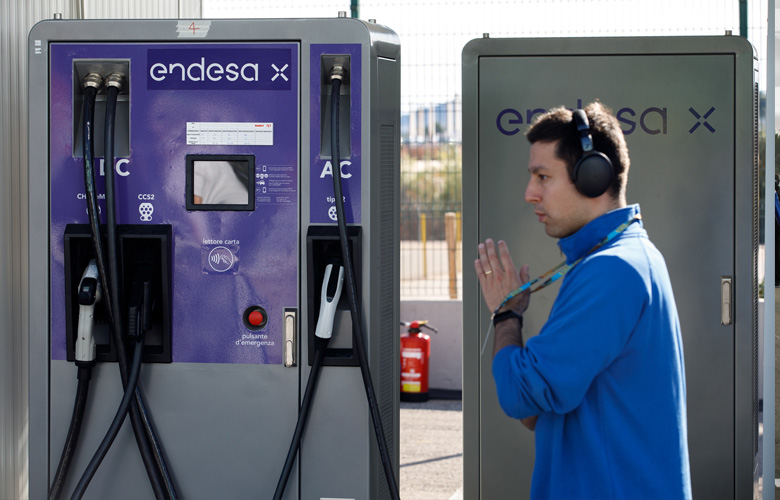 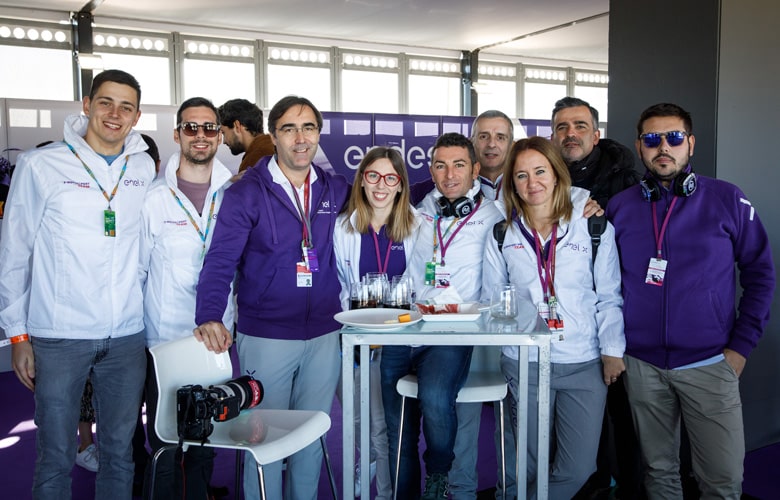 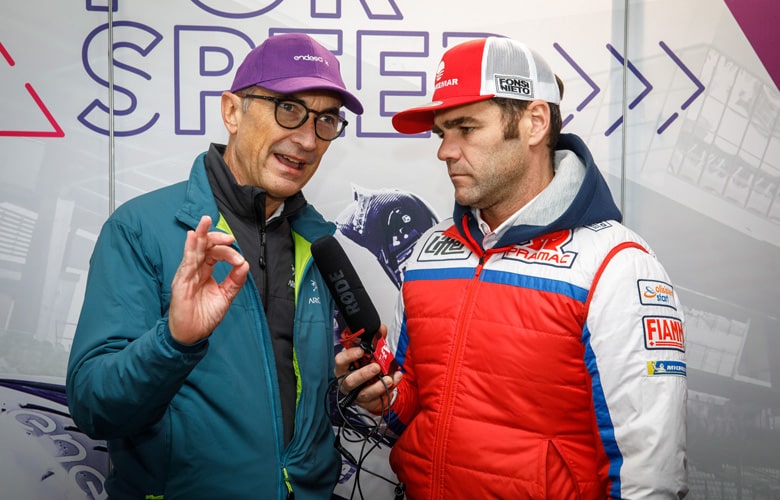 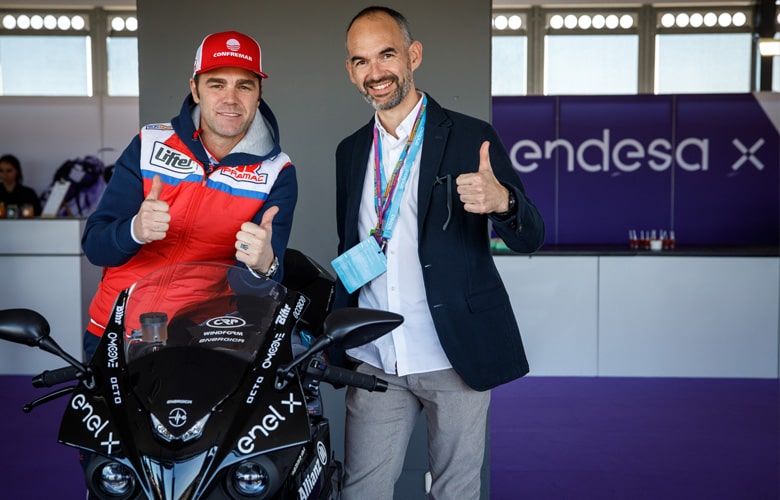 The same thrills, a different energy

At four in the afternoon everything was set for the qualifying laps to challenge for E-Pole position. One by one the riders emerged through the Enel X arch at the entrance to the pits and each had the possibility to perform just one lap. The fastest finisher was the Brazilian Eric Granado, followed by Matteo Ferrari and Bradley Smith. Spain’s Hector Garzo, the main challenger for the title, qualified in fifth place. This would be the order out on the grid for the final races of the season. Two races of seven laps each, 12 teams, 18 riders flying at top speed around the corners and straights of the 4.05 km Ricardo Tormo di Cheste circuit just outside Valencia. While the cornering and overtaking moves were just the same as those of the MotoGP, the big difference was the electric energy powering the bikes and ensuring zero emissions.

From the racing track to streets and homes everywhere

The two races were exceptionally close, with neck and neck duels, both at the front and further back. In the end, taking the chequered flag, both in Race 1 and Race 2, was Eric Granado, while for Matteo Ferrari it was enough to finish both races in a point-scoring position in order to clinch the title. This was actually a career first for the Italian rider, who celebrated on his way to the podium by signing his name on the Enel X JuicePole.

There were also notable celebrations for the Brazilian, who was awarded the X-shaped MotoE trophy for winning the race. The trophy had been created following a competition, in which Enel X invited users to submit their ideas, selecting the design that collected the most votes in an online poll. This was just one way to get people involved in the great spectacle of the electric motorbike world cup and the related sustainable innovation which our company has developed both for use on the racing track and in customers’ homes. Indeed, #TryThisAtHome is our invitation to bring the charging infrastructure used in the MotoE and the ABB FIA Formula E Championship to everyday life. 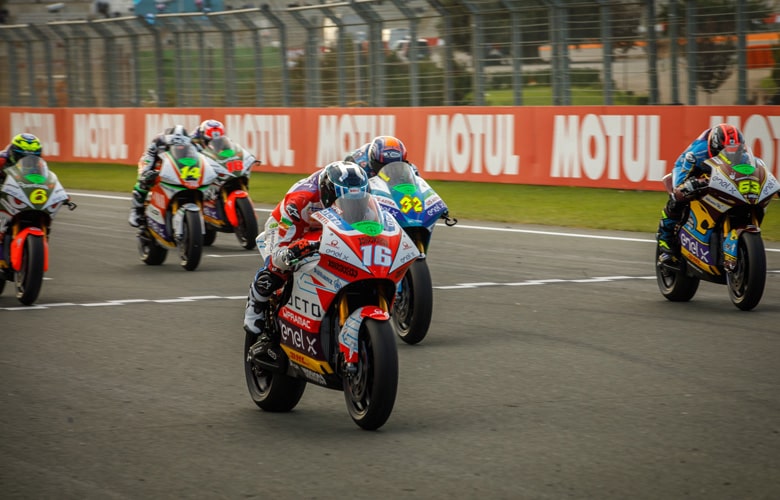 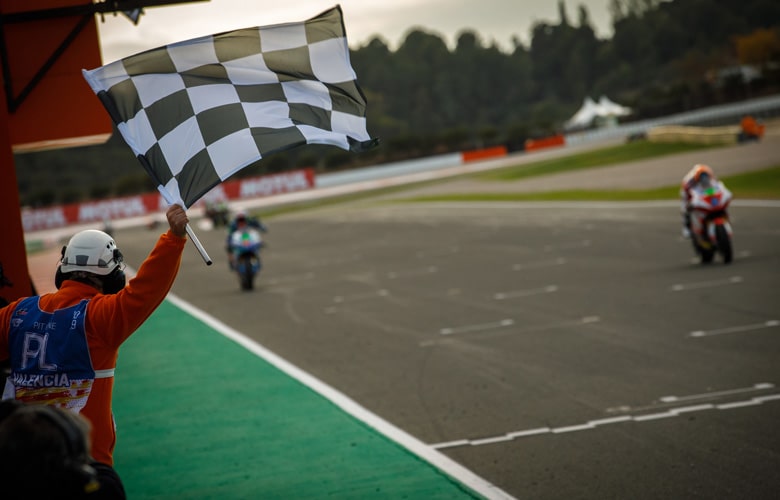 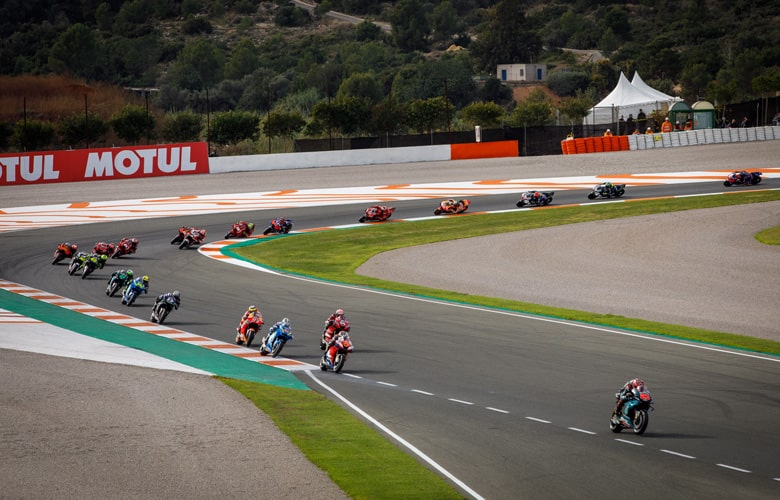 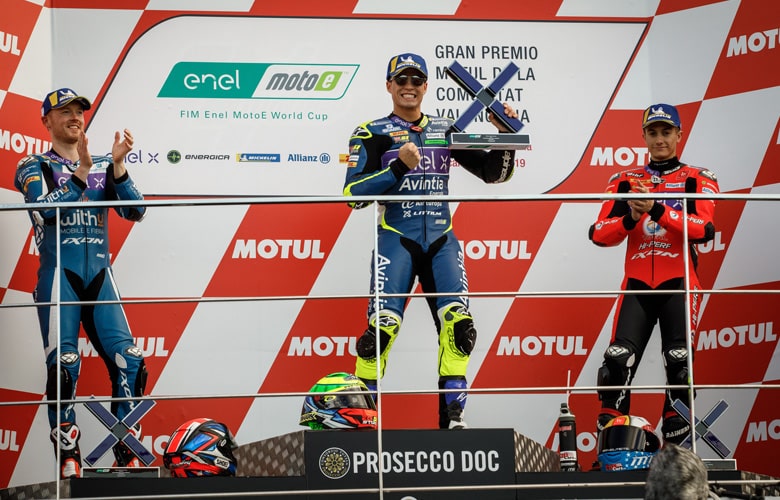 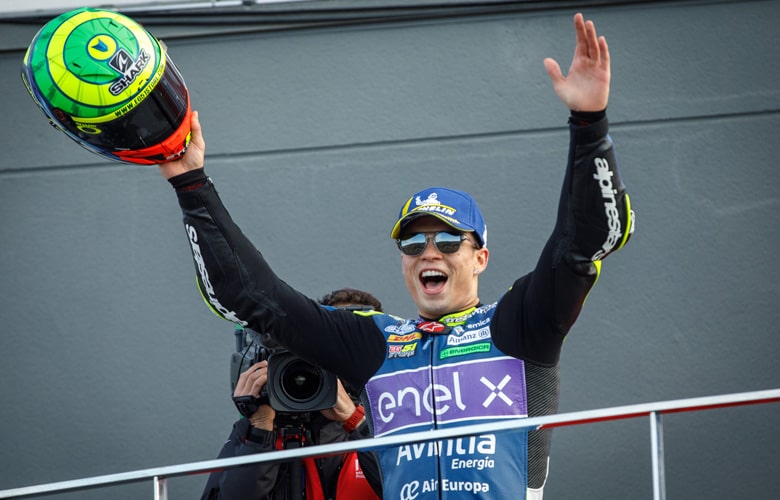 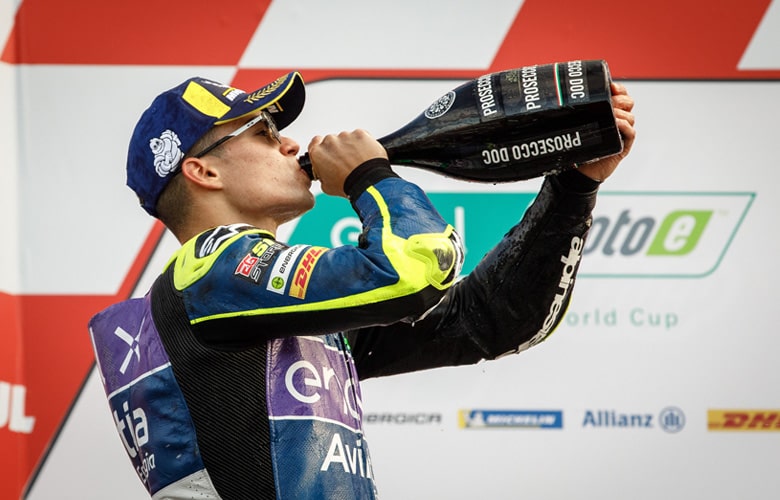 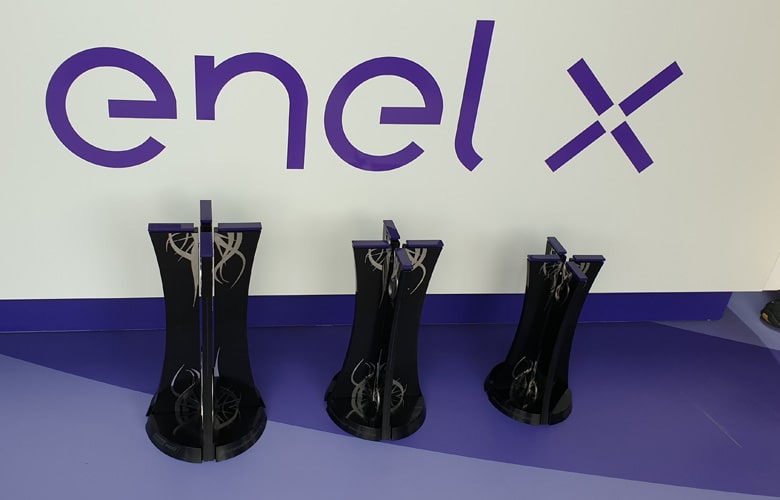 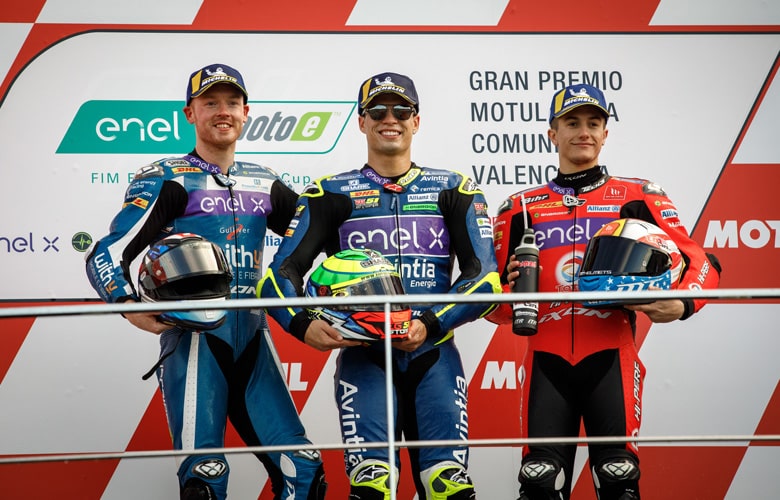 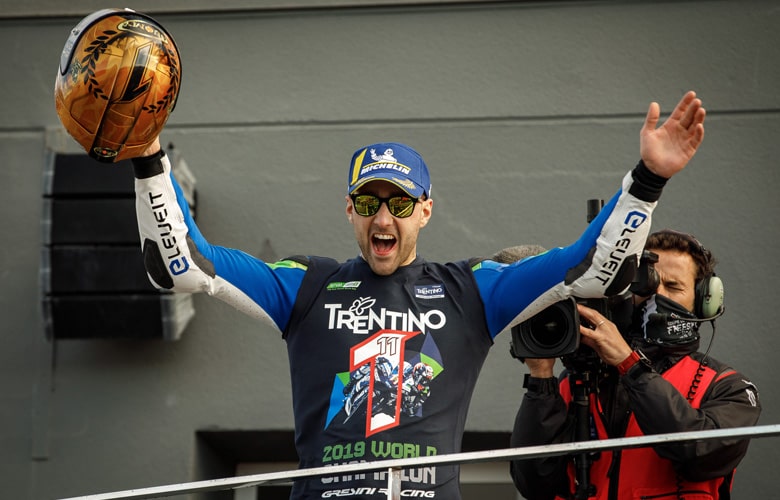 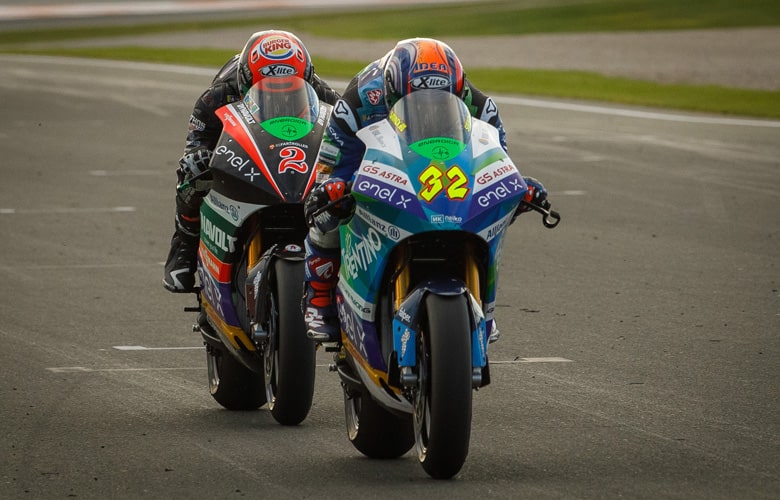 Enel X’s involvement in MotoE will continue next year with the second season of the electric world championship. Pau Serracanta, managing director of Dorna, announced that the 2020 races will once more be held all over Europe, while from 2021 the competition could include races on other continents. The provisional calendar involves five events, beginning on 3 May in Jerez de la Frontera (Spain) and concluding on 13 September in Misano (Italy). We at Enel X will be attending, secure in the knowledge that the progress made in innovation for eMotorsport is fundamental to accelerating the transition to electric mobility. Because all of the technology being tested on the track helps us improve and perfect the products and solutions that we are introducing on the streets and in the homes of customers everywhere, for a future that is ever more efficient and sustainable.

MotoE, all the energy of Enel X in Misano

Our sustainable mobility technologies played a key role in the Italian debut of the first all-electric motorcycle world championship, from 13-15 September.

Giro E, in the saddle with Enel X for the e-mobility revolution

On 1 June the first Giro E, the e-bike Giro d’Italia sponsored by Enel X, crossed the final finish line. Here are some of the stats, the stories and the protagonists of this year’s race