The e-Mobility innovation challenge: the story of Rosa Della Sala

We need the best people to think up new ways of using energy. This is how Rosa demonstrated her talent, by imagining a solution to the problem of parked cars blocking e-vehicles’ access to charging stations. As a result, she won a place on our team

It can happen to anyone who owns an electric vehicle. You need to charge your battery only to discover that the charging station is occupied by an unattended, parked car.  The solution to this problem was found through the challenge competition launched by Enel X on the openinnovability.com crowdsourcing platform, which I took part in. The prize for the winner and the runner-up would be jobs at Enel.

My name is Rosa Della Sala, I am 28 years old, from Avellino. I am a millennial and, like most of my generation, I believe that care for the environment and curbing wasteful behaviour, the ability to share experiences and to understand other people’s points of view, their needs and habits are all essential to tackling the challenges that lie ahead of us. This is why I chose to study Psychology at university and, later, to specialise in Communication and Marketing, so that I could best express my creative side and merge it with my habit of putting myself in the shoes of others. 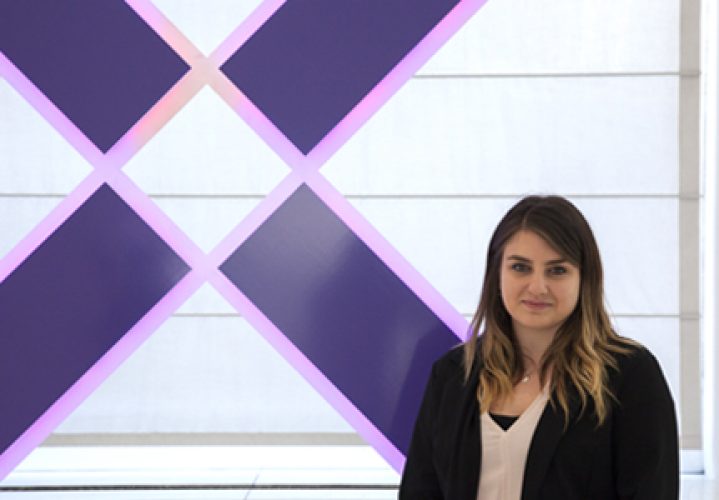 I am a curious, dynamic person attracted by new ideas, by opportunities to experiment, to learn and constantly put myself to the test.

I realised five years ago that I was ready for a new challenge, so I moved to Rome to follow my dreams and aspirations. My first contact with the world of Enel was in 2017: an internship in the People Care & Diversity Management Holding unit. It was a revelation: I found an environment that pulsed with innovation, was open to good ideas from the outside, attentive to sustainability and intent on making a positive impact on the future. It was just what I was looking for.

After that first experience, I then worked in the People Care and Diversity Management Italia unit on a maternity placement. During this time, Francesco Starace, Enel CEO and General Manager, launched a new challenge, aimed at the generation of 18 to 29 year olds, at the Millennials Ambassadors Forum. Over 60 young people responded to the call. I was one of them.

The challenge required a clear, intuitive solution that would be user friendly and attractive, while also technically feasible and cost-effective. In short, a solution appropriate to the business and clients of Enel X, both innovative and creative. First, I tried to focus on the needs of the client. I imagined someone using an e-vehicle, mostly for moving around the city, someone open to environmental issues and keeping up with innovation.

My millennial’s digital mindset immediately made me think that the solution should be both socially interactive and smart. My psychology studies gave me the idea that a reward mechanism would be the best way to achieve my goal:  to convince drivers to stop using the charging area as a parking place by leveraging their sensitivity to environmental issues. I decided that a bonus system, contained in an app, was what was needed.The solution I proposed is called “environmental conscience” and it interacts directly with users, giving them a participative role that will consolidate their interest in safeguarding the environment. I prepared the slides and the video presentation about myself and my experience, pressed send and crossed my fingers.

In June I was feeling a bit down. My maternity placement had finished several days earlier, so I was feeling sad. Out of the blue my smartphone beeped to signal an incoming email. It was from Enel. My heart thumping, I opened it. My proposal had been successful. I had won the challenge and was due to begin working on the Enel X Communications team as of 2 September! My new challenge was about to begin.