Goodbye range anxiety: travelling the roads of Italy in an electric car

The story of a journey of over one thousand kilometres in an electric car: on the road in Italy exploding the myth of range anxiety

A journey of more than one thousand kilometres in an electric car to prove that, in actual fact, range anxiety is a myth that needs exploding.

The hero of this adventure is Fabio Grappasonni, a technician at the Spoleto premises of e-distribuzione, the Enel business line responsible for managing and distributing electricity. The idea, he points out, came last summer when for the very first time he experienced the thrill of driving a fully electric car, the new Nissan Leaf Enel X Edition. “I didn’t think twice and immediately decided to lease one. For me it was a dream come true. I’ve always had a passion for model cars: I began building my first wired remote-control cars when I was just a boy. I used to power them with a battery that I would hang around my neck.” This love for electric cars has never faded. “I moved on to playing with radio-controlled cars and since then I’ve never looked back. In recent years I have moved on to helicopters and electric planes, because my other great passion is flying: whenever I get the chance, I pilot a small light aircraft.”

The car arrived at the beginning of October: since then Fabio has been using it every day, for journeys of up to 100 kilometres. The vehicle is silent and very easy to drive, the cost of journeys are minimal and, most importantly, it doesn’t produce polluting emissions. Fabio then came up with the idea to head off on this challenge together with his wife. It was to last five days and, departing from Spoleto, they would make a number of stops, passing through Florence, Lucca, Genoa, Pisa, Livorno, Cecina, Volterra and San Gimignano. The trip was planned to every last detail, especially taking into account the range of the vehicle (250 kilometres guaranteed per charge). Not only that, for each stop Fabio reserved accommodation that offered the possibility to charge the car for free, taking advantage of the overnight stay. “Before leaving,” he explains,” I also downloaded the Enel X JuicePass onto my smartphone. This allowed me to identify and reserve available public charging columns, making it really easy to charge the car.” 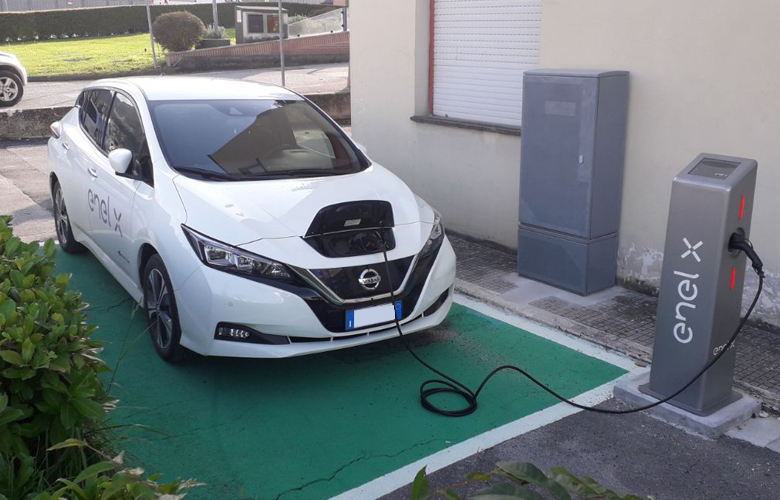 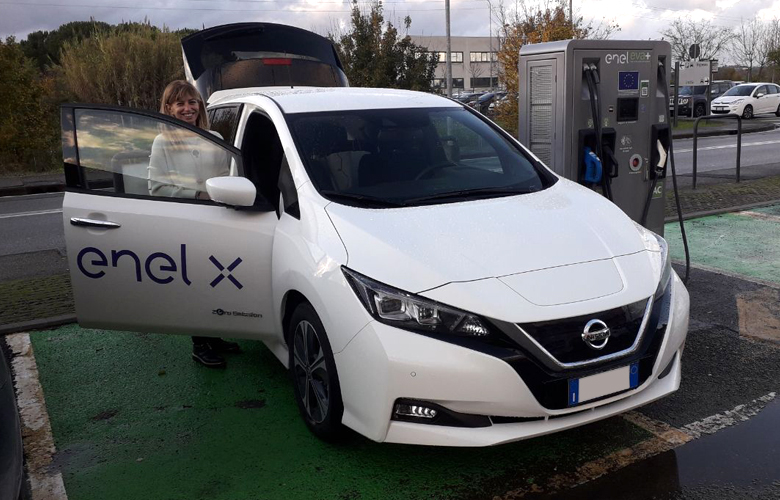 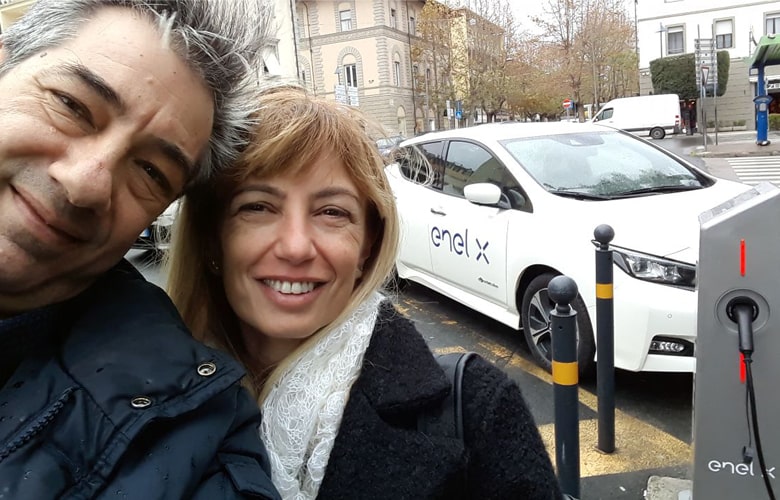 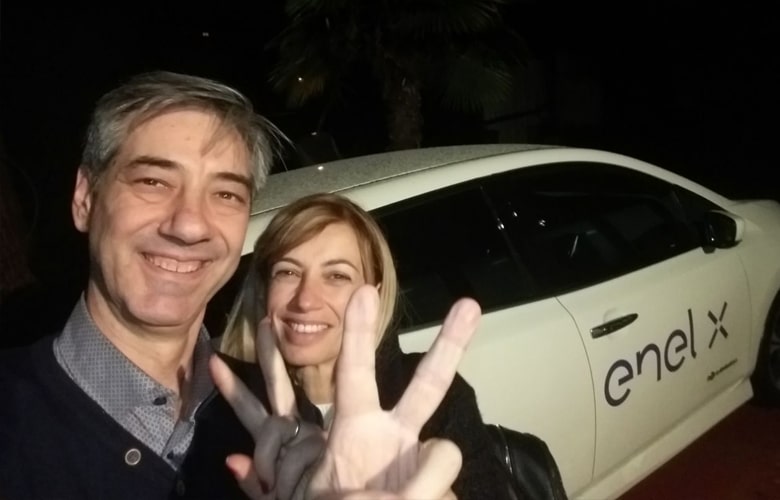 On board the Nissan Leaf: the pleasure of driving

The plan for the first day involved a journey of 330 kilometres, with a break to visit the city of Florence and then carry on to Lucca. After a pleasant motorway journey, the couple reached the capital of the Tuscany region. Dealing with city traffic in an electric car is so different compared with what you might think (another myth exploded!). “The adaptive cruise control system, which includes a distance control feature, makes everything more relaxing.” Furthermore, thanks to permission to travel inside the limited traffic zone, the car is able to enter and park right in the city centre, where it can charge. “Using the JuicePass,” Fabio explains, “I looked for a charging column and found several available, only to discover that unfortunately many of them had been occupied illegally by parked cars, an inconvenience that I hadn’t considered.” JuicePass, however, turned out to be essential once more: in order to avoid wasting further time, the couple opted for a private car park equipped with an Enel X Wallbox in the city centre. While the car was charging, there was all the time in the world to dedicate to visiting the city until late into the afternoon, when with the Nissan already charged and ready to go, Fabio and his wife then set off for Lucca.

After a brief tour of the city, in the late morning of the following day the couple were back on the road: another 200 kilometres to Genoa. Along the way Fabio and his wife took a small detour to visit the town of Pietrasanta. “We were amazed by the brick spiral staircase, which leads to top of the church’s bell tower. How wonderful it was to admire all this beauty in complete tranquillity!” In the early afternoon they had already reached Genoa, where they decided to leave the car at a Fast Recharge column in the area of the port. This was the perfect opportunity to venture out into the narrow lanes of the city to get to know the real Genoa. After around 50 minutes, a notification arrived on Fabio’s phone to let him know that the car was ready to collect, but not before the couple had found time to visit the famous Genoa Aquarium and admire its splendid collection of marine wildlife.

Another day, another stop: this time Pisa, even though the weather wasn’t the best. “On the motorway it just kept on raining so, to be on the safe side, I slowed down to about 95 km/h – 105 km/h at the very most –  also because I know that the car consumes more in wet conditions,” he continued. The vehicle, nonetheless, kept on performing, thereby demonstrating that rain and electrics are not sworn enemies (goodbye to yet another myth!). Once they reached the city famous for its leaning tower, the rain stopped. Leaving the car in the hotel, a historic establishment located on the riverfront and offering free charging from a Wallbox, the couple then dedicated the whole day to visiting the Campo dei Miracoli and the rest of the city.

On waking up the following day, they were met with the latest of a series of pleasant surprises that they enjoyed on their trip. “The owner of the hotel where we were staying was waiting in the hall to congratulate us: it turned out that we were the hotel’s first guests with an electric car.” The owner explained that the hotel is the oldest in Italy and he led the couple on a special tour of the areas that are not usually open to the public, like the kitchens that still contain some period pieces. “Then from an old safe he pulled out an ancient diary,” Fabio explains, “ with messages from some of the hotel’s illustrious guests (on one of the first pages is the signature of Guglielmo Marconi!). Then he asked us to add our own message! Completely thrilled, we left the following words: ‘Today, 28/11/2019, Italy’s oldest hotel played host to the most modern electric car, the Nissan Leaf Enel X Edition, charging it perfectly.’”

Back on the road, after around half an hour the couple reached Livorno. “Here we tried to leave the car to charge at one of the charging points in the city centre, but we found both spaces occupied illegally. We then headed towards Cecina, where the charging column indicated on the JuicePass app was available.” The trip then took the pair in the direction of Volterra. “We left the car to charge for the night not far from our hotel, and we spent the whole afternoon visiting the cathedral, the baptistery, the Roman theatre and other monuments in this magnificent citadel.”

The final day arrived: there were just 250 kilometres left of this wonderful trip. “It was unbelievable, time had just flown by. From Volterra we headed to San Gimignano,” continued Fabio, “and the Nisan Leaf had another great surprise in store: the regenerative braking made it so easy to tackle the many hills along the route, enabling me to drive without ever having to touch the brake pedal”. Once they had reached their destination, the couple parked near the historic town centre and headed towards its famous towers. “We climbed the Torre Grossa and the view takes in all of the surrounding countryside. It was wonderful to be able to enjoy this incredible natural landscape. Along the way, next to the Valdichiana Outlet Village, we made our final stop to fill up with energy at an Enel X Fast Recharge station, while we took advantage of the opportunity to do a little shopping. “After less than an hour we returned to the car and, satisfied with our day’s work, set off for home, where we arrived in the late afternoon. “Our trip was over,” Fabio concluded, “but we’re so happy to have experienced it!”

No more excuses: e-travel in Italy really is possible

Mission accomplished. Fabio and his wife managed to prove that it really is possible to travel long distances in an electric car, also thanks to the commitment of Enel X, which in recent years has been pursuing a structural plan to extend and intensify the network of charging stations in all directions. Taking into account the costs, it’s clear that the overall picture is a positive one: to travel more than 1,000 kilometres the couple spent less than 50 euros on charging (a drop in the ocean compared with the equivalent cost of fuel). “This is an experience that I will most definitely repeat and one that I would recommend to everyone: travelling by electric car is possible, thoroughly enjoyable and, most of all, it’s incredibly convenient.”

Technology at the service of speed: the year of MotoE

The inaugural season of the electric motorcycle world championship has concluded with Italy’s Matteo Ferrari taking the title. A truly spectacular championship in which Enel contributed with our technology for sustainable mobility. The next appointment is in May 2020 for another truly electrifying season

MotoE, all the energy of Enel X in Misano

Our sustainable mobility technologies played a key role in the Italian debut of the first all-electric motorcycle world championship, from 13-15 September.