Help: a powerful cry lit by Enel X to help the oceans

A new artwork stands in the Roman Forum in Rome – HELP the Ocean. Its message is one of environmental sustainability, an appeal that has been rendered even more powerful by artistic lighting by Enel X

It’s called the Garbage Patch State and is a virtual nation. It has no inhabitants, but a huge surface area formed by the five largest islands of plastic floating in the oceans across our planet. The Garbage Patch State is considered to be the world’s second largest country after Russia, and has its own flag and diplomatic representative.

It gained recognition as a state in 2013. This symbolic and deliberately provocative move was intended to highlight the urgent nature of the problem posed by plastic pollution. The “state” was founded by Italian artist Maria Cristina Finucci, who, since its establishment has served as its ambassador. The aim of her installations is to raise public awareness around the world of one of today’s most pressing environmental issues. It’s a mission that we at Enel X share and wish to support, backed by our experience in enhancing the impact of works of art.

The artist-activist’s most recent creation is her work “HELP the Ocean”, now on display in one of the world’s most famous locations, the Roman Forum in Rome. The installation comprises 76 plastic cages, each measuring 1 metre by 1 metre by two, standing in the area of the Basilica Giulia and configured in such a way as to spell out, when viewed from above, the single word HELP, a stark, powerful appeal.

Seen from up close the cages communicate another message, not in words but in a visual form with an intense aesthetic impact. Every cage is covered with a net full of millions of plastic bottle tops originally adrift in the environment and then collected by thousands of volunteers specifically for this artwork, helping reduce environmental pollution. In this way the cages appear as a multi-coloured patchwork, with a similar shape to the foundation blocks of the ancient Roman structures that surround them, but with a striking chromatic contrast that is sure to inspire a strong emotional response from the visitors to the site.

The work was opened on World Oceans Day, 8 June. The date was doubly symbolic due to the fact that the day’s theme this year was the fight against plastic pollution, almost as if it were a sort of national event for the Garbage Patch State, in fact. 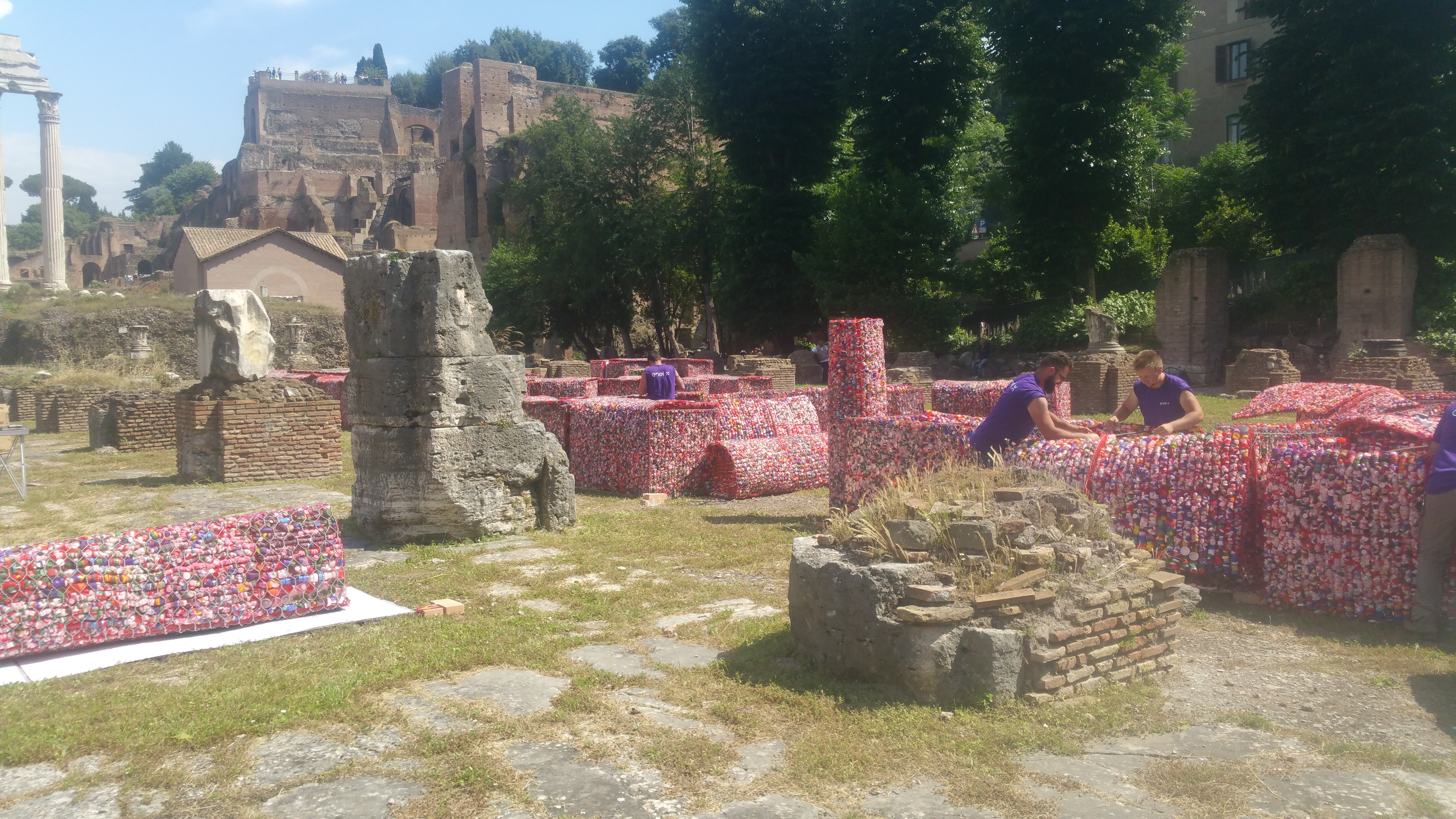 The cages strike up a dialogue with visitors both from a distance and nearby, but there is a third, internal level, and this is where Enel X has an important role to play. Inside every cage Enel X has installed units that will provide artistic illumination for the entire installation, a light that originates within the installation itself. During the day our work cannot be seen, but after sunset it lights up the word HELP, giving the large letters an even greater impact in the brooding darkness of the Forum, intensifying the urgency of the appeal for the health of the oceans, piercing the silence of indifference.

During the opening press conference Francesco Venturini, CEO of Enel X, emphasised that we have drawn on our great experience in artistic lighting, adapting it to the needs of this specific context.

As a result we selected units that although of limited size and weight can project a wide beam of light. Inside every cage we have installed two 42 W LEDs at 3,000 degrees Kelvin, covered by an LEE 150 Orange filter. The light beams, directed downwards, are reflected upwards by white Forex PVC panels in the base. The lamps’ power supply is also concealed inside the cages to eliminate any visual intrusion caused by our equipment. The striking result is, in the words of Alfonsina Russo, Manager of the Colosseum Archaeological Park (which also includes the Forum) a “light-based cry for help.”

We’re very happy to have made a contribution to publicising and promoting the HELP message to protect the seas and the environment and to encourage a more aware and rational use of resources. That’s why Enel X works every day to develop technologically innovative solutions with the aim of improving our lives and safeguarding the environment we live in

For Venturini, an artistic spirit, energy efficiency and innovation are the principles that inspired Enel X’s solution for this installation, and for all the others – over 1,300 in all – that Enel X has contributed to during over twenty years of experience in artistic lighting. One of the most recent and spectacular examples, as Venturini reminded his audience, was the system put in place for the basilica of Santa Maria Maggiore, also in Rome, but the full list ranges from the Alcázar in Seville to the Tower of Pisa, the archaeological area of Pompeii and more recent structures like the futuristic Ponte Cittadella in Alessandria designed by American architect Richard Meier.

This time, though, we’ve taken a step forward. For the launch of the installation on 8 June the Colosseum Archaeological Park held a Blue Carpet event in the presence of Mayor of Rome Virginia Raggi, Enel CEO Francesco Starace and figures from the worlds of show business, sport and culture who lent their support to the initiative. During the event we put on an innovative show, projecting a video onto the facade of the Palazzo Senatorio in piazza del Campidoglio showing the early development of the HELP installation and aerial views of it at night taken from an overflying drone.

The projector and computer used for digital management, concealed from the audience and shielded from the weather, especially the wind, provided a 4K resolution even at some considerable distance from the façade, as well as high-quality lighting and contrast.

All in all it was an event that gave increasing urgency to the light-based cry for help and the message of sustainability.

All resources
STORIES FOR BUSINESSES

Enel and the Chocolate Factory

A confectionery factory in Bogotá is producing electricity from the photovoltaic system on its roof; installed by Enel, this is the Group’s largest photovoltaic plant in Colombia

The circular economy at the core of Enel X

The future of the economy is circular. Enel X has placed this model at the centre of its strategy with the aim of accelerating and multiplying the benefits for clients and suppliers. The advantages do not only concern the environment, but also economic growth and new business opportunities